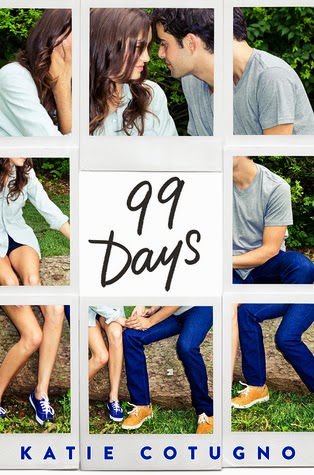 Goodreads synopsis:
Day 1: Julia Donnelly eggs my house my first night back in Star Lake, and that’s how I know everyone still remembers everything—how I destroyed my relationship with Patrick the night everything happened with his brother, Gabe. How I wrecked their whole family. Now I’m serving out my summer like a jail sentence: Just ninety-nine days till I can leave for college, and be done. Day 4: A nasty note on my windshield makes it clear Julia isn’t finished. I’m expecting a fight when someone taps me on the shoulder, but it’s just Gabe, home from college and actually happy to see me. “For what it’s worth, Molly Barlow,” he says, “I’m really glad you’re back.”
Day 12: Gabe got me to come to this party, and I’m actually having fun. I think he’s about to kiss me—and that’s when I see Patrick. My Patrick, who’s supposed to be clear across the country. My Patrick, who’s never going to forgive me.


Rating: 4/5 stars
I received this ARC in a giveaway so naturally, I was super excited about it. From the synopsis, though, I wasn't sure if I would like this book that much, though. Cheating is a touchy subject and, in a lesser author's hands, could've been terrible. What I didn't expect was to love this book.  Contemporary isn't my strong suit but just... yes. This book was great. The story in 99 Days just worked so well.

The idea of each chapter being one day in Molly's summer was a great idea, and a wonderful way to make this book not seem like every other contemporary novel about a girl caught between two guys. That's also what I liked about ... it's about so much more that just Molly's cheating on Patrick. It's a story about Molly's personal growth, her journey to discovering who she is through the lens of the trouble she's caused/will cause in her hometown. It was a part of the book that I wasn't expecting but was very delightfully surprised by.

Katie Cotugno's writing style is really great. It was almost addicting. I honestly had a hard time putting this book down. The way the flashbacks were written fell into place so well. They were placed at the right moments in the book, enough to keep the reader informed but so much as to make the reader feel slapped in the face with information. The writing is definitely one of the strongest points in this book.
What I also really liked was the way the female characters were written. First of all, the Bechdel test was passed a few times in the book, with Molly's conversations with her mom, Imogen, Tess, Penn, Connie and even Julia. It's awesome. Plus these characters are all so real. Sometimes, in novels like this, the heroine is seen as the perfect angel who can do no wrong. Not here. Molly's flaws are pointed out and acknowledged. Molly sees her flaws and tries to learn from them. The reader can definitely see that she's flawed, but still has some redeeming qualities despite the cheating. I think this is what made me like her so much - she feels like an actual person. Not just a flimsy YA heroine.
I also really liked that the double-standards that are involved in cases of cheating were pointed out in the book too. Yes, Molly was wrong to cheat, obviously... but shouldn't Gabe be blamed to a point too? Like Gabe points out, it takes two people to sleep together. This was a great aspect to the novel that, again, pleasantly surprised me.

There's really only one thing that annoyed me in this book. Molly's fixation on being "fat" was just so unrealistic. She mentions that she gained around fifteen pounds over the past year, and before that she was a track runner. Molly mentions being fat a few times in the novel but it just really annoyed me because fifteen pounds on an athletic frame is not fat - especially considering that the model on the cover is far from being anywhere near "fat". This part of the book really didn't make any sense and had absolutely no reason to be there. It just felt kind of fat-shamey, honestly.

There's also the part at the end where Molly realises that Patrick didn't know that she had actually slept with Gabe was kind of... stupid? Patrick isn't shown to be dumb up to this point, so he should've put two and two together in the entire year he had to stew and hate Molly for what she did...

All that said, though, I think 99 Daysis a wonderful book about personal discovery and journeys. Also, the part at the end where Molly's mom tells her that one thing you have to decide as a writer is "which stories to tie up at the ending [...] and which ones you have to let go." In my opinion, it's a great life lesson and I justloved that Katie Cotugno added it to her book.99 Days releases April 21st and it is definitely a must-read. I would recommend this book to anyone who's looking for a sweet book about finding yourself and figuring out your life. I was happily surprised by this book, especially based on just the synopsis, and so will you.
Posted by Unknown on Thursday, January 15, 2015