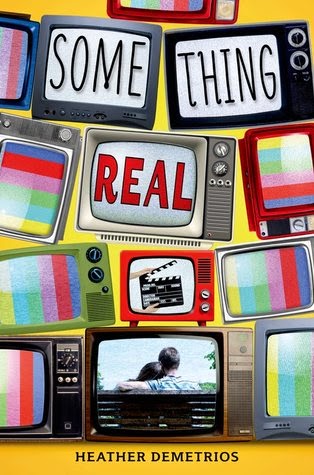 Goodreads synopsis:
Winner of the 2012 PEN New England Discovery Award!
There’s nothing real about reality TV. Seventeen-year-old Bonnie™ Baker has grown up on TV—she and her twelve siblings are the stars of one-time hit reality show Baker’s Dozen. Since the show’s cancellation and the scandal surrounding it, Bonnie™ has tried to live a normal life, under the radar and out of the spotlight. But it’s about to fall apart…because Baker’s Dozen is going back on the air. Bonnie™’s mom and the show’s producers won’t let her quit and soon the life she has so carefully built for herself, with real friends (and maybe even a real boyfriend), is in danger of being destroyed by the show. Bonnie™ needs to do something drastic if her life is ever going to be her own—even if it means being more exposed than ever before.

Rating: 4.5/5 stars
**This review may contain slight spoilers**
The main reason I was attracted to this book was because the premise seemed so interesting. A family who's life has been filmed from the day their first daughter was born? Hell yes. I was interested to see how the author would explore the way this affected the lives of the children in the family and the world around them. And Heather Demetrios definitely did not disappoint. The story felt, despite the somewhat-outrageous circumstances, so real and it even found a way to be relatable to its readers- which is no easy feat with this kind of story.

The writing is my favourite aspect of this book. It made me feel things. I was frustrated for Chloe/Bonnie and felt terrible for her for what she was going through - especially the scenes with her mother and Chuck. I was happy for her when good things happened to her and cheered her on at the end of the book. I felt like I was almost living through Chloe/Bonnie's life and everything that was going on. Heather Demetrios' writing was spot on here. It made the story come to life. I could see everything clearly in my mind.

Second, I loved the characters. Benny, Lexie, and Patrick were definitely my favourites. The characters were all very well-formed and I could more or less differentiate them in my mind (some of the less-mentioned Baker kids where a little more difficult, though). The main characters made the story even more real because they were pretty fleshed out - you can understand their motives in actions quite clearly without being info-dumped with their backstory.

I also really enjoyed the execution of this concept. The basic reality-TV-show-family theme turned into a discution about privacy and mental illness. The way that being thrust in the spotlight unwillingy aided in the development of Chloe/Bonnie's depression, anxiety attacks and suicide attempt mirrored the way that people are constantly thrust in the public eye through social media can affect their well-being. It also made a link to the way today's media blurs the lines of privacy. I especially enjoyed the comparison to George Orwell's 1984. Something Real surprisingly provides a commentary on the way privacy is infringed today in the name of celebrity. It's something that delighted me about this book.

Finally, Benny and Matt's story was absolutely perfect. Their relationship was adorable and the way Heather Demetrios portrayed their coming out was really great. Their worries, dreams and hopes were so realistic. I was almost whooping with happiness for them at the end. The fact that Heather Demetrios portrayed the way a gay relationship could also be affected in this type of situation only made it more interesting to read. The relationships were all well-developped; the way Chloe/Bonnie and Lexie's relationship evolved, Chloe/Bonnie's ever-supportive friends, Tessa and Meredith and, of course, Chloe/Bonnie and Patrick. I loved it all!

There really isn't much I can say I disliked about this book. The ending is really what I had the most difficulty with. It's not that it wasn't good - I liked it and it was satisfactory - but, because it ended with Chloe/Bonnie and Patrick literally driving off into the sunset (sunrise), it wrapped up all too neatly. But I still felt like there were some loose threads. We get no explanation or apology from Chloe/Bonnie's mother for having been so horrible to her and Benny, and a few other things. In my opinion, the ending was a bit too happy and perfect. However, it was still a nice ending that was enjoyable, even if it was a little bit too neat and tidy.

Something Real is a pleasant book about a girl trying to discover who she is when she's lived her entire life under the eye of a camera. The characters and relationships are well-developed and the writing makes all the scenes come to life on the page. The added commentary on today's society's views on privacy and media makes it a novel that is both fun and thought-inducing. I recommend it to anyone who's looking for a fun and interesting contemporary novel with a unique storyline. This is definitely one of my new favourite books!

This is a great debut by Heather Demetrios and I am now even more anxiously awaiting her next book I'll Meet You There, which releases on February 3rd!!

What do you guys think of Something Real? Have you read it? Did you enjoy it? Leave a comment below!