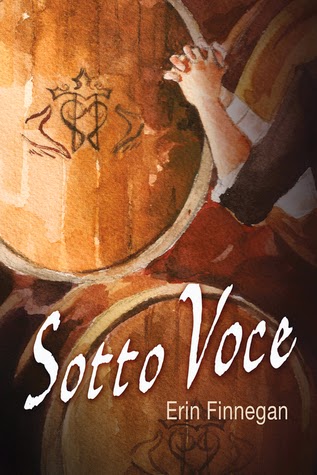 Goodreads synopsis:
New York-based wine critic Thomas Baldwin can make or break careers with his column for Taste Magazine. But when his publisher orders him to spend a year profiling rising stars of California’s wine country and organizing a competition between the big name wineries of Napa and the smaller artisan wineries of Sonoma, his world gets turned upside-down by an enigmatic young winemaker who puts art before business.

Sotto Voce is the story of love and wine, and how both require patience, passion, an acceptance of change—and an understanding that sometimes, you have to let nature take its course.

Rating: 4/5 stars
Sotto Voce started off slowly for me. There were a few times where I considered quitting it, but there story and the setting intrigued me and compelled me to keep reading. And am I glad I did. Sotto Voce was a sweet love story with a setting that was obviously well-researched. It's definitely one of my favourites.

The best part of this book, in my opinion, was its setting. Sotto Voce mostly takes place in Northern California's Sonoma county, home to boutique and family-owned wineries. Throughout the novel, Ms. Finnegan paints a lovely picture of this wine county. The descriptions of Greg's property and the country around it were so vivid - I could see everything clearly in my head. This and the way the different wines were described were really what made this book perfect, in my opinion. The wine/viticulturist aspect was front and center in this story - more so than the romance aspect - but I really didn't mind it because it was done so well. Learning about the way that wine is made was really interesting.

Now let's talk about the characters. I loved Tom and Greg. They were sweet and sarcastic and really well-written characters. Their love story progressed naturally and beautifully. I was rooting for them the whole way through. Carmen and Brooke were also great side characters. I do wish they would have gotten a happier ending, though. Also as much as Tate was a jerk, he was a wonderful antagonist and the way his interactions with Tom and Greg were written were highly entertaining.

I did find that the pacing of Sotto Voce was a bit fast at times and the writing could be confusing. For example, the way I understood it was that Tom would be in California for a whole year and then there would be the competition between the Sonoma and Napa counties' wine after that year when in fact the competition takes place roughly halfway through the book. It took me by surprise and kind of interrupted the flow of the story because the logistics of Tom's project weren't super clear. I also would have liked a bit more back story from the characters. The story did touch a bit on where they came from/how they got where they are, but it didn't go into too many details, and I think that might have made the story and its characters more real, instead of just scratching the surface of their personalities.

Sotto Voce by Erin Finnegan is a great story about love, passion and the art of wine making. It's beautifully written with vivid descriptions and characters that I fell in love with immediately. Even with its occasionally slow-pacing, it's a book that is meant to be savored and enjoyed, like the cover says. I would recommend this to anyone who's looking for a sweet love story and maybe wants to learn a few things about the culture of wine making.
Posted by Raven Lynch on Saturday, January 31, 2015