Book Review - When Everything Feels Like the Movies by Raziel Reid 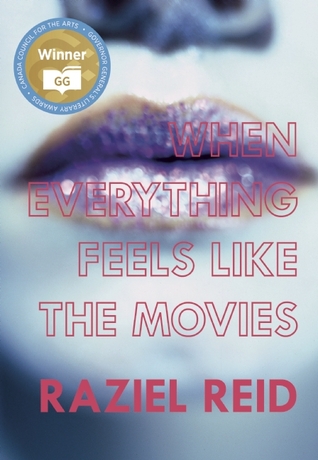 Goodreads synopsis:
School is just like a film set: there's The Crew, who make things happen, The Extras who fill the empty desks, and The Movie Stars, whom everyone wants tagged in their Facebook photos. But Jude doesn't fit in. He's not part of The Crew because he isn't about to do anything unless it's court-appointed; he's not an Extra because nothing about him is anonymous; and he's not a Movie Star because even though everyone know his name like an A-lister, he isn't invited to the cool parties. As the director calls action, Jude is the flamer that lights the set on fire.

Before everything turns to ashes from the resulting inferno, Jude drags his best friend Angela off the casting couch and into enough melodrama to incite the paparazzi, all while trying to fend off the haters and win the heart of his favourite co-star Luke Morris. It's a total train wreck!

This book is kind of hard to review. Not because it's a bad book. On the contrary, it was amazing. But just because it's... touchy. I can't explain much without giving away the ending, but this book is basically a roller-coaster ride of emotions. To quote the lovely Chapters employee who recommended this book to me, "It'll rip your heart out, but it's really good." And boy was he right.

The main protagonist, Jude, is a very flamboyant gay teenager (well, kind of teenager... he's in middle school!). He likes to wear makeup and apologizes to absolutely no one about anything. This is why I really, really liked Jude. He's proud to be who he is, even if it gets him bullied and taunted at school. Gay YA novels don't often have characters who are out and proud and it was refreshing to read.

However, this isn't the only aspect of Jude's personality explored in the book. Jude's family is not an ideal one. His mother is a stripper who married and had a kid with this awful, honestly kind of creepy guy after Jude's father abandoned them. Jude says throughout the book that he hates being home because of all the crap he has to deal with.

Because of this home life, he pretends that his entire life is a movie (his friends are co-stars, the school is 'The Set', etc). It's a facade he puts up, I think, to protect himself and to make him feel less vulnerable. It's a facade that also comes from his need to be loved - something he doesn't feel much of at home. There are a few instances in the book where this facade goes down. Had this been a longer book, it would have been so interesting for Raziel Reid to delve more into Jude's mental state because it was so interesting to read. Characterization and backstory is done pretty well in WEFLtM, but it would have been nice to see more of the 'real' Jude - the one who isn't acting.

There were also a lot of other characters that would've been nice to see more of. Angela, for example. She had her own set of issues, much like Jude's, that were only barely touched-upon in the novel. I feel like she was only there to support Jude and that's all she mattered for. She turned on him almost instantaneously for no reason. A little more explanation into her character might've been nice.

The prose is my favourite thing about WEFltM. It reads like Jude's memoir and it's just so lyrical and beautiful. There were a few times where I stopped reading because I just loved a certain paragraph or sentence. Honestly, it's what makes the book because Raziel Reid is very much able to paint a vivid picture of Jude's life and the things around him. You can see that Reid is a film-school graduate. Some descriptions and actions read almost like they were from a screenplay and it made it so easy to see what was going on in my head. This book was optioned for a film and I think it would be a wonderful movie, especially if it's a David Cronenberg movie. It just has that kind of feel to it.

There's one thing that really bothered me about WEFltM, and it's what drags my rating down; the characters are supposed to be 13 or 14 years old. Yet they drink, do drugs (a lot), have sex, etc. I know that there are kids that age who do this in real life, but it just felt a little unbelievable. This is a story that would have fit better to maybe 16 year-old characters. I just didn't feel like the characters could be real, acting like they did at such a young age.

When Everything Feels Like the Movies is a beautiful book. It's written beautiful and the characters are intriguing. I do think this book could have benefited from being longer, maybe 250 pages instead of 170. I felt like there could have been more to it. More to Jude, who is such an interesting queer protagonist. And more of all the other characters who were equally as interesting. It's a tough book to read, for sure. If intense homophobia triggers you in any way, this is a book to stay away from. But it's an important book to read and its protagonist is wonderful.

The ending will rip your heart out, but, like me, you'll most likely be happy that it did.
Posted by Raven Lynch on Tuesday, March 10, 2015

Email ThisBlogThis!Share to TwitterShare to FacebookShare to Pinterest
Labels: arsenal pulp press, book, book review, contemporary, lgbt, raziel reid, when everything feels like the movies, YA, YA book review