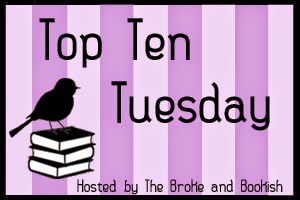 Top Ten Tuesday is a meme hosted by  The Broke and Bookish where we can post our top ten bookish things of the week. This week's theme is "Top Ten Books on My Spring TBR List."

I was looking at the books I have to read and the count actually only goes up to fifteen or sixteen books - which is actually pretty impressive. This doesn't count books that are being released or that I haven't bought yet.

1. Earth and Sky by Megan Crewe

6. These Broken Stars by Amie Kaufman and Megan Spooner

7. Let's Get Lost by Adi Alsaid

Email ThisBlogThis!Share to TwitterShare to FacebookShare to Pinterest
Labels: special post, t10t, the broke and the bookish